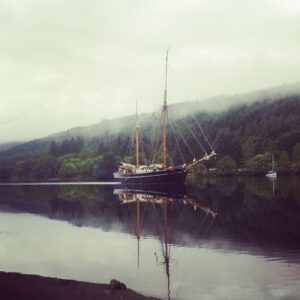 Today, Bessie Ellen safely arrived to her old home here in Logstor, Vesthimmerland, after a voyage of many parts. Our last voyage crew of the season joined their ship up near Fort William for a week passing through the Caledonian Canal, then across the North Sea, finally entering the Limfjord to depart at Aalborg

The first day started with incredible rain, so wet we were all soaked by lunch.  As the day wore on, the highlands lit up with glorious sunshine for us to pass the 9 locks of Neptunes Staircase to the canal proper.  A fast transit meant Bessie Ellen was able to get through Loch Lochy (Had the Scots run out of names when naming this one?)to end the day at Laggan under the emerald hills.  Despite a few midges the night was still and the voyage crew relaxed into the roll of handling the ship.  Day 2 .  Wound our way through the canal and into the mystical Loch Oich(see photo )a day so still the reflections of mountains and water made it hard to navigate.  A lunchtime descent at Fort Augustus and across Loch Ness  – no monster to be seen anywhere in the hot sunshine.  We are enjoying ourselves on the canal and may retire from the sea – so relaxing.

Day 3 Inverness and the call of the sea.  Out we shot into the moray Firth  setting sail passed the bridge the horizon stretched away to the east under clear skies.  Bottlenose dolphin and their young joined us to say goodbye to Bessie Ellen.  The night passed mostly under sail as the lights of old herring ports twinkled out to Starboard, Macduff, Buckie Portsoy, all quiet in the warm night.  By daybreak the wind had increased to 30 knots and steering was pulling the ship to weather so the mizzen and flying jib came down.  On she rolled – 8.5 knots ripping along, sweeping past oil rigs, not using a drop of their black blood to move her.  At night the structures appear as  futuristic cities, vast and imposing, feeding off the earth.  Onwards we sailed until the wind died and the vessel became shrouded in fog.  Thick fog, so thick the navigation lamps lit up the night, our world became small and tense, looking out for other ships also   creeping towards new harbours.

With no wind at all the engine was started, places to go, timetables to keep and planes to catch and with 55NM to go the wind just could not fill the sails enough.

Day 5 Dawn broke and the fog started to lift creating pastel skies you seem to get in the East.  Nothing like an island dawn – still and silent.  A low coastline emerged then the chimneys and windmills of Thyboron broke the skyline.  Now we were in the land of shallow water and sand, not deep water and rocks of which I am so used to.  With voyage crew steering, told to stay inside the channel marks or we will go aground – and no tides here to help you out.  The sun was bright now – and hot! All sails were set and the crew tacked up Nissum Breeding and on through the bridge, reaching at 6.0kts towards the high bridge connecting Mors to the mainland.  Uneasy with the height of bridge and mast – just doesn’t look 29 M!! the ship falls silent – expecting to touch at any time.  Then we are through with a big sigh and headed for Nykobing for the night.  Our voyage crew have sailed all day, and as the sun sets our voyage seems to have come to an end although still 14 nm further to our departure destination it seems fitting to relax and remind ourselves of the past week with so many parts.

The ship is quite now, all ready for the next band of merry souls – here for racing the Limfjord with a fleet of traditional sails.  Here’s to fair winds boy’s!