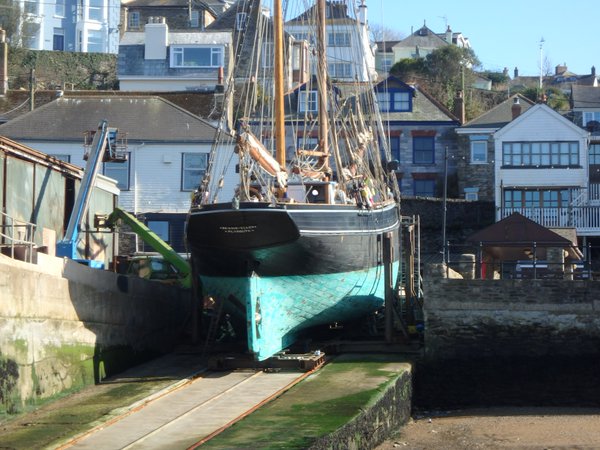 Every year, Bessie Ellen is hauled out to Polruan Shipyard near Fowey for all the work that is needed to keep her afloat and in survey. Paul Toms, 4th generation ship builder now runs this charming yard right in the heart of this picturesque Cornish village. C. Toms & Son’s own story is just part of a long history of boatyards in Polruan, and we are pleased to be able to share some of the history of ship building in the village written for us by Maritime Historian, Dr Helen Doe.

“If you look at Toms yard today, you are looking at a site that has built and repaired ships and boats for centuries. Today’s craftsmen follow a long, long line of skilled shipwrights.

In the medieval period, ships from Polruan included the Edward that was involved in the wine trade with Bordeaux and was also known to take to piracy on occasions. This was a large ship and she was described in 1433 as carrying over 200 men ‘armed and arrayed for war’.

There is little to say exactly where such ships were built or by whom and it was not until the 1700s that a little more information could be gleaned. What we do know is that the site where Toms’ yard is now has been a shipbuilding site for a very long time and it can definitely be traced to William Geach & Son. They were certainly operating there from 1789 and were probably based there well before this date. They built sloops and schooners, the largest being 93-ton Mary in 1824.

William Geach & Son went bankrupt in 1836 and the site was idle for a while. At some stage Butson arrived and set up his business there, later moving upriver to Brazen Island. It is almost impossible to find out exactly where ships were built as information is limited.

Another shipbuilder in Polruan was Christopher Slade, who may have been an apprentice to either Geach or Butson. Slade’s first yard was below West Street and he operated there from 1841. When Butson moved to Brazen Island, Slade moved into the yard below East Street but retained his West Street yard and also leased a second yard further along West Street (this yard had originally been leased by Marks & Rendle until 1840s). The Slade family of shipbuilders remained on the site below East Street until the Second World War.

Beside the dock at Newquay lived John Edward Hocken who had a sail making business there until 1910. Many famous Polruan ships were built here during the 19th century and Polruan built larger and greater numbers of ships than Fowey during the last half of the century. The largest ship built in the port of Fowey was the E S Hocken, a 237-ton barquentine launched in 1879. Many of the ships were small and fast and built for the Atlantic fruit trade. Among these was the Jane Slade, 170 ton schooner, later to be immortalised by Daphne du Maurier as the Janet Coombe in her novel ‘The Loving Spirit’.  It was a period of boom for the local economy with many Polruan families investing in the ships and providing the masters and the crews.”

Bringing Helen’s history up to date, in 1922, Charlie Toms started his business working in a blacksmiths shop near the dock at Newquay. Over the years, he and his son Jack grew C. Toms & Son and took over the whole of the Newquay yard, using John Edward Hocken’s old sail loft as their offices. Meanwhile Daphne du Maurier purchased the boatyard below East Street in 1943 from the business partner of Thomas Slade and the Hunkin family ran the yard on her behalf.

Later in 1968, Ms du Maurier sold this yard to Jack Toms and his wife and in 1987, the beach between the East Street yard and Newquay was filled in to achieve the larger premises you can see today.